Why Fake Job Agents and Scams Thrive in the Maritime Industry?

Last week we received a mail from a recently graduated marine engineer who became the latest victim of fraudulent job agents. The agent not only disappeared with a hefty sum of money but also wasted his one full year.

Unfortunately, the damage has already been done!

The engineer has almost given up on his dreams and is planning to seek an alternate career path. This was surely not what he expected at the end of his four years of hand work. 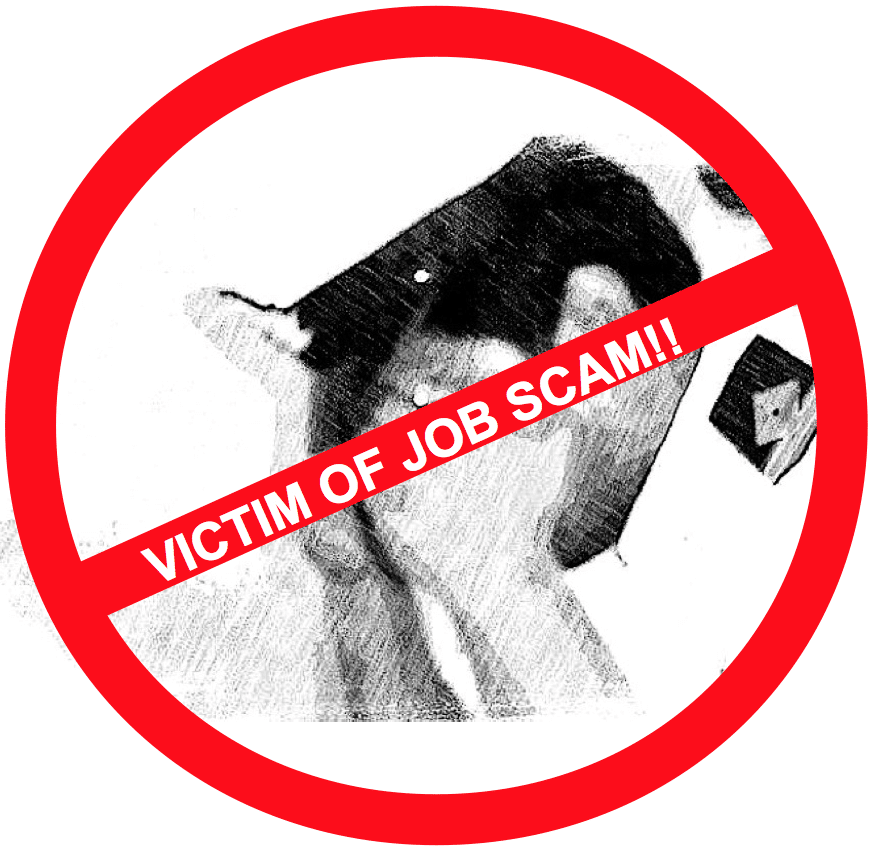 The worst feeling we got after reading his mail was that of “helplessness”.

Honestly, we did not know what to reply.  We have received several such mails in the past, mostly from fresh graduates, who have already suffered or were fortunate enough to know about a fraud agent or agency before investing their money.

Every time we reply to such mails, we feel extremely disappointed. It’s a sad scenario out there, especially for young mariners. What is more sad to see is businesses thriving on their “misery”! There are several shipping agents and companies making good money out of this situation.

Later, while talking to the young engineer, we were shocked to find that he has received the reference of the agent from an online maritime website. On digging deeper, we found that there were dozens of such advertisements from fake job agents and profiles on the same website. It didn’t require much time to figure out that the website was over-flooding with such “scammy” advertisements and activities. 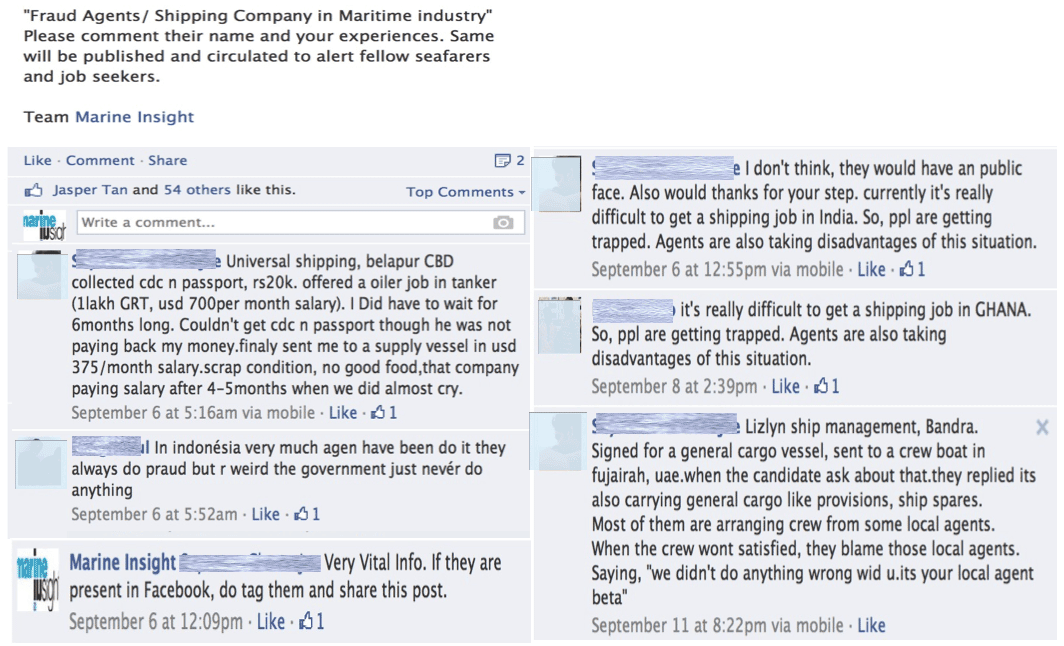 Although we were aware of such activities taking place in the maritime industry, we didn’t expect it from a website which was not only allowing such ads but also promoting them.

Several maritime jobs’ websites have cropped up online, especially in the last couple of years. Considering the financial woes of the maritime industry, it is difficult to comprehend from where do they get all the advertisements from.

We did a bit of research and found that many maritime jobs websites were doing the following: 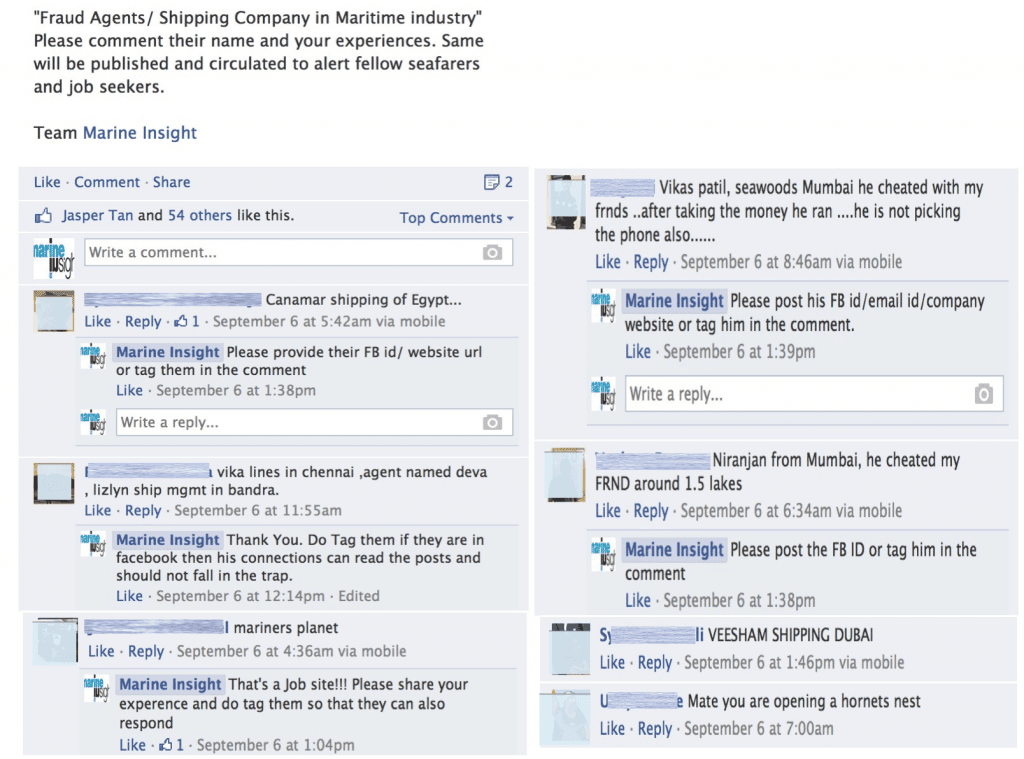 Today, with a bit of knowledge it is easy for anyone to build a website and market fake jobs. Those doing this already know where to find the job-seekers online. If you are new to the online job search market it might be difficult for you to identify these fake advertisements at the first glance. Here are a few tips which might help you to identify such advertisements.

With the increasing menace of fake job agents and other malpractices, it was imperative for us to draw people’s awareness towards the issue. Social networking websites such as Facebook are brimming with such job scams. Fake profiles, fake contact numbers and fake addresses are some of the famous means for such fraudulent activities.

We also found that people involved in such malpractices also did the following things:

There have also been cases in the past wherein agents have sent candidates to foreign countries for joining ships but kept their CDC and other important seafaring documents with themselves. They then made excuses that the documents were misplaced or lost. When the joining date of the candidate had passed, he was brought back to his home country saying that the ship has already sailed. Moreover, some agents have even failed to give back the documents to the candidates whereas others have given them back, but kept the fees received from the candidate stating that it was required to retrieve the lost documents.

There are many similar cases involving large sums of cases, broken dreams, and spoiled careers. Unfortunately, the number of such cases are rising with the increase in joblessness in the industry.

Are the Ship Management Companies Responsible?

Most ship management companies have a very transparent and professional hiring procedures for new candidates. However, there are a few who engage in malpractices, knowingly or unknowingly. Some of the common practices followed by these companies that have give rise to fake job agents are:

– It’s a common practice followed by many ship management companies to provide a joining date to a candidate prior to a month or two. As the date approaches and the candidate mentally prepares himself for the ship, the company says the joining has been delayed. In some cases, the delay seems like eternity to the candidates who are ready with their preparations and are just waiting for the company’s call. But then, the joining date would again get delayed by four to six months, and sometimes even a year. Needless to say, the candidate is extremely frustrated by now and has lost the trust in the company. He thus starts seeking other modes of placements such as job agents.

Ship management companies also sometimes give authorization to fleet managers/personnel for posting advertisements online or on maritime job websites. Some fleet personnel take this as an opportunity and post these requirements under fake names, providing their contact number or sell the information to an agent seeking a hefty commission in return. As the only aim for some companies is to bring in fresh candidates, irrespective of the ways in which they have been recruited, the hiring process becomes a lucrative business for a few involved in the process.

It is seen that most of the companies do not make extra efforts to check the background of the agents who are bringing in the candidates. Thus, many of them ask service charges from the candidates or get involved in some other malpractices.

Apart from the above mentioned ones, there are many more reasons as to why seafarers are not getting jobs.

Finding the Root Cause of the Problem

The job scam industry thrives and runs on a situation which is a product of several aspects. Though the prime reason can be stated as financial crises faced by the industry, there are many other reasons which can be stated as below:

While there is lack of jobs for young graduates in the industry, shipping companies are leaving no stones unturned to find qualified and experienced maritime professionals for higher ranks on ships. There is a dearth of  management level mariners as many are leaving the field for better opportunities on shore. Both these types of conditions, though ironically opposite, are worsening day-by-day as there have been no concrete steps taken by the governing authorities to resolve these issues.

Until some major steps are taken by the government to rectify these proples, fake companies and agents will continue to exploit the professionals and tarnish the image of the maritime industry.