The marine industry is an essential link in international trade, with ocean going vessels representing the most efficient and often the only method of transporting large volumes of basic commodities and finished products.

Bulk carriers play a major role in the global economy. Dry bulk cargoes cover a wide range of products. Some of the most commonly handled dry bulk materials are coal, cement, grain, sulphur, fertilizers, iron ore and sugar. These products are generally not packaged separately but transported in large quantities in the hold of a ship. 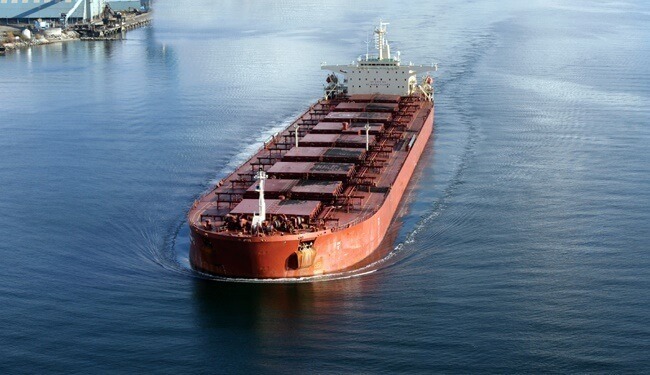 Some of the most common hazards of bulk cargoes on board ships are mentioned below:

1.  Cargo shift: Cargo shift has always remained as one of the greatest dangers on bulk carriers. This problem is greater for ships carrying grain cargoes. Grain settles by about 2% of its volume. Because of this settling, small void spaces exist on the top of grain surface. These void spaces permit the grain to shift. The free flowing characteristics of grain reduce the stability of any ship carrying it. Trimming is undertaken to reduce the danger of cargo shifting. Rolling can also cause shifting of cargo from one side to the other and reduce her positive stability resulting in the vessel to capsize.

2. Cargo falling from height: Cargoes like iron ore, quartz and steel scraps are high density cargo. There is a possibility of cargo falling from height during cargo operations. Cargo may either fall from the conveyor belt of the shiploader or from the discharging grab on to the deck of the ship. People working on deck can get injured badly if hit by the sizeable lumps of the bulk cargo. It can be as bad as death. Cargo operation should always be monitored by responsible officers and care should be taken that no unwanted personnel are present on the working area of the deck. Persons who are involved in the cargo operation should wear protective clothing including hard hats, safety shoes and highly visible vests.

3. Dust from working cargo: Dust is one of the most common hazards in bulk carriers. Many bulk cargoes are dusty by nature. Dust particles are small enough to be inhaled and if inhaled can have disastrous effects on health. Anyone working on the deck can be exposed to high levels of dust. Dust can cause sneezing and irritation of the eyes. Where possible it is always best to avoid exposure to cargo dust however if exposure cannot be avoided protective face masks should be worn. Those involved in cargo operation and need to be present on deck when a dusty cargo is being loaded or discharged and anyone sweeping cargo with a brush or with air should wear a suitable respirator. Filters should be renewed when soiled. Deck machinery should be properly protected as they can be adversely affected by dust.

4. Cargo Liquefaction: Liquefaction is a phenomenon in which solid bulk cargoes are abruptly transformed from a solid dry state to an almost fluid state. Many common bulk cargoes such as iron ore fines, nickel ore and various mineral concentrates are examples of materials that may liquefy. Liquefaction occurs as a result of compaction of the cargo which results from engine vibrations, ship’s motion and rolling and wave impact that further causes cargo agitation.

Liquefaction results in a flow state to develop. This permits the cargo to slide and shift in one direction thus creating free surface effect and reducing the GM thereby reducing stability. Shippers declaration should be thoroughly examined by the chief officer before loading any bulk cargo. He must make sure that the moisture content of the cargo to be loaded should not exceed the transportable moisture limit to avoid liquefaction during the voyage. Often shippers declaration turn out to be faulty. Spot checks can also be carried on board ships to check the moisture content.

5. Structural damage: Heavy cargoes place high loads on the structure and structural failure is therefore probable. High density cargoes occupy a small area for a large weight that is they have a low stowage factor. It is therefore important that the tank top has sufficient strength to carry heavy cargoes like iron ore, nickel ore, bauxite etc . The load density of the tank top should never be exceeded. Tank top strength is provided in the ship’s stability booklet. Exceeding the maximum permissible cargo load in any of the holds of a ship will lead to over stressing of local structure. Overloading will induce greater stresses in the double bottom, transverse bulkheads, hatch coamings, hatch covers, main frames and associated brackets of individual cargo holds. Poor distribution of and/or inadequate trimming of certain cargoes can result in excessive bending and sheer forces.

6. Oxygen depletion: Sea transportation of bulk cargoes of an organic nature such as wood, paper pulp and agricultural products may result in rapid and severe oxygen depletion and formation of carbon dioxide. Thus apparently harmless cargoes may create potentially life threatening conditions. The cargo holds and communicating spaces in bulk carriers are examples of confined spaces where such toxic atmospheres may develop. Several fatal accidents can occur when people enter unventilated spaces. The IMSBC code lists the following cargoes as potentially oxygen depleting: coal, direct reduced iron, sponge iron, sulphide concentrates, ammonium nitrate based fertilisers, linted cotton seed. Various gaseous products are formed including carbon monoxide, carbon dioxide, hydrogen sulphide and hydro carbons. Entry of personnel into enclosed spaces should be permitted only when adequate ventilation and testing of the atmosphere is done with appropriate instruments. Emergency entry may be undertaken with SCBA. Some cargoes also use up oxygen within the cargo space. The main examples are rusting of steel swarf cargoes. Some grain cargoes may also deplete the oxygen content in the cargo space.

7. Corrosion: Some cargoes like coal and sulphur can cause severe damage due to corrosion. Cargoes of sulphur in bulk are normally subjected to exposed storage and are thus subjected to inclement weather thereby resulting in the increase of moisture content of the cargo. Wet sulphur is potentially highly corrosive. When sulphur is loaded, any retained free water filters to the bottom of the holds during the voyage, from where it is pumped out via the bilges. Some water remains on the tank top and reacts with sulphur. This leads to the release of sulphuric acid resulting in the corrosion of the ship’s holds. Pond coal which is reclaimed after having been abandoned and dumped in fresh water ponds usually have high moisture content and sulphur content. This type of coal may be liable to react with water and produce acids which may corrode parts of the ship.

8. Contamination: Preparation of cargo holds for the next intended carriage is a critical element of bulk carrier operations. A lack of proper preparation can lead to claims related to cargo quality such as contamination, water ingress or cargo loss. Residues and dust of previous cargo can contaminate the presently loaded bulk cargo and can cause cargo stains that are not acceptable. Cement when contaminated by residues of previous cargo reduces its binding capacity. Unrefined sugar if stored near or above dry, refined sugar can damage it by the draining syrup. Water ingress may result from leaking hatch covers, back flow through bilge systems, leaking manhole lids and inadequate monitoring. Cargoes like salt can absorb moisture and dissolve into a liquid. Sugar can ferment in the presence of moisture. The bilges should be pumped out regularly during the voyage.

9. Fire: Bulk cargoes are deemed to present a great deal of fire hazards. Many bulk cargoes have a tendency to heat due to the oxidation process taking place during the voyage. Common cargoes like coal, sulphur, cotton, fishmeal are liable to spontaneous heating. Coal also emits methane which is a flammable gas. When mixed with air it can form an explosive mixture. Dust created by certain cargoes may constitute an explosion hazard. Sulphur dust can readily ignite causing an explosion. Friction between cotton bales can cause spontaneous combustion and produce heat. Fire precautions should be strictly observed on bulk carriers.

The ship as carrier is obliged to care for the cargo in an expert manner to ensure it is discharged in the same state in which it was loaded. The IMSBC code should be consulted for the safe stowage and shipment of solid bulk cargoes. Suitable precautions and good seamanship should be adopted to minimise and overcome the hazards of bulk cargoes.

Note: This is not an exhaustive list of hazards of bulk cargo, but enumerates the most common ones.