Год выпуска: 2001
Версия: 2 edittion
Разработчик: United Kingdom Hydrographic Office
Платформа: Any Windows
Совместимость с Windows7: да
Системные требования: N/A
Язык интерфейса: только английский
Таблэтка: Не требуется
Описание: Tidal Prediction
There are various methods used to attempt to accurately predict the movements of the tides around the world. The two main methods used are Harmonic Prediction and Mathematical Modelling. Mathematical Modelling methods (such as the one employed by the Proudman Oceanographic laboratory) attempt to predict the tides by formulating a function of time and location from tidal observations that can produce a tidal height for any given point in the ocean. Harmonic Prediction uses observations local to the point of prediction to determine the tidal 'curve' and from this the individual components of this curve (the harmonics) are derived.
As the harmonic method produces predictions in isolation for each point of observation (normally a port) it is generally more accurate at that point than the mathematical methods that need to fit their point predictions to an overall model (where some of the fine detail of the tide may be lost). The model has the advantage that it can produce predictions anywhere in the area that it covers, however the majority of people are only interested in the tidal height at a particular port, not in the middle of the sea (where there is plenty of water for them to sail their vessel in). Therefore the harmonic method is generally held to be the more suitable way of producing tidal predictions in the sailing and shipping world.
The theory behind the harmonic method explains why it can be such an accurate method of tidal prediction (note: the harmonic method is often referred to as the 'full harmonic method' to distinguish it from the 'simplified harmonic method' and 'non-harmonic method'). There are many different factors which have a regular effect on the tides; obvious ones such as the gravitational force of the sun and the moon plus some less obvious ones.
Each of these factors in isolation produces an effect on the tide which can be represented with a simple curve over a fixed period (e.g. 28 days for the rotation of the moon about the earth). The factors can be stored as one of over 220 different harmonic constituents that a tidal prediction can use. In practise not all the harmonic constituents for a point are stored as at any one particular point some of the less signification harmonics may represent a factor that has no impact on the tide at all.
When a prediction is to be made each of the stored harmonics are 'projected forward' and combined to produce the complex curve that represents the actual behaviour of the tide.
However, despite our best efforts to accurately predict the tides there are two meteorological factors which can influence the exact nature of the tide at any given moment:
•Barometric pressure
•Wind
The combination of these two factors can cause several different effects, from the general lowering of the sea level (due to high pressure) to the creation of wide 'waves' (known as storm surges) that can cause a relatively large change in the tidal height for a period of time.
The Full Harmonic Method is used by the United Kingdom Hydrographic Office to produce the Admiralty Tide Tables and was implemented by CherSoft in the Admiralty TotalTide software.
For free, on-line tidal predictions you can use the UKHO's EasyTide system (www.easytide.com) which was developed by CherSoft and provides worldwide predictions using the TotalTide 'prediction engine'. 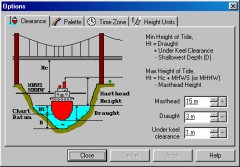 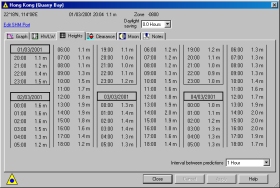