When a ship moves through restricted waters, it has to navigate close to the shore and other manmade structures because of limited navigable width. The shallow water and proximity of the sides of the channel effects the ship navigating through the restricted waters. These effects cause errors in maneuvering which can lead to grounding or collision.

Any ship (regardless of its size) navigating through restricted waterways is heavily affected by hydrodynamic effects. In this article we will understand three of the most common effects experienced by ships – Squat, Bank and Bank cushion effects.

Squat effect: When a ship moves through the shallow water, some of the water displaced rushes under the vessel to rise again at the stern. This decreases the upward pressure on the hull, making the ship sink deeper in the water than normal and slowing the vessel. This is known as squat effect, which increases with the speed of the vessel.

Bank effect: Bank effect refers to the tendency of the ship’s stern to swing towards the near bank when the ship is operating in a river or restricted waterway.

Bank Cushion effect: When the ship is near to the bank, the water is forced between the narrowing gap between the ship’s bow and the bank. This water tends to pile up on the starboard side of the ship, causing the ship to sheer away from the bank.

Before we move ahead, let’s understand some of the basic principles of physics we will be using to understand these effects.

Consider a horizontally placed hourglass-shaped transparent cylinder. Let us make an arrangement wherein water passes through that cylinder which is partially constricted at the middle as shown in figure 1.

What do you notice?

You will notice that the liquid flows at a faster pace in the constricted area ( fig1).

Why does this happen?

There is an equation in physics that is known as “ Continuity Equation” which states that when a fluid is in motion, it must move in such a way so that the mass is conserved. This means that in a continuous flow of fluid in fig 1, the mass of fluid passing through point A is equal to that at B and also at C, in unit time.

To make this happen, the rate of flow of water at constricted point C must be more than that at A or B. This also means that the velocity of flow at a constricted point is always greater so as to satisfy the Continuity Equation.

Theoretically, if A is the cross section of the cylinder and v is the velocity of an inviscid (non sticky) fluid, then A is inversely proportional to v, i.e., Av = constant.

Now one may ask why we are delving into all these when the topic is Squat effect and Bank effects on ships passing through restricted waters? Simple, to clearly understand these effects we will have to realize a few basic principles.

The next is Bernoulli’s Principle, which states that for an inviscid flow (flow of an ideal fluid that has no viscosity), an increase in the speed of the fluid (i.e. its Kinetic Energy) occurs simultaneously with the decrease in pressure or decrease in its Potential Energy and vice-versa. Actually this principle is a corollary of theLaw of Conservation of Energy which says the sum total of all the energies in an isolated system (roughly speaking no energy can be transferred into or out of this system) always remains the same

Thus in our first experiment (fig 1), the increased speed at constricted point C caused a decrease in pressure at that point. If you want to see an experiment you can watch the video below:

Thus, theoretically, if P is the pressure at a point and v is the velocity of an incompressible fluid, then:

Without going into anymore mathematical complexities, let us now understand the Squat Effect.

Let us consider the figure 2 of a ship in restricted waters:

A ship S is plying in shallow water.

If z and z’ be the underwater clearance at fore and aft respectively, then obviously from the diagram it is evident that z> z’. Thus clearance under the keel at point A is greater than at point B. Now from the Continuity Equation we know that velocity of the flow of water (it is considered to be non-viscous and incompressible) at the stern is greater than that of the bow, or simply the flow is asymmetric.

But Bernoulli’s principle tells us that with increase in speed of flow at B, there is a decrease of all round pressure at B, which means that at B (at the stern) the ship will sink further and may touch the channel bed. If the vessel is trim by head, the bow will tend to sit in the mud because of less pressure. This is the Squat Effect.

Squat effect increases doubly with speed. If the ship sinks x cm due to Squat Effect due to y speed then it will sink 4x cm in 2y speed.

Thus to minimize squat, the pilot or the master of the ship has to maintain slow speed. If the pilot sees that with no considerable change in shaft speed, the vessel is slowing down, then the Squat is happening. He should immediately reduce the speed to minimize the Squat effect. 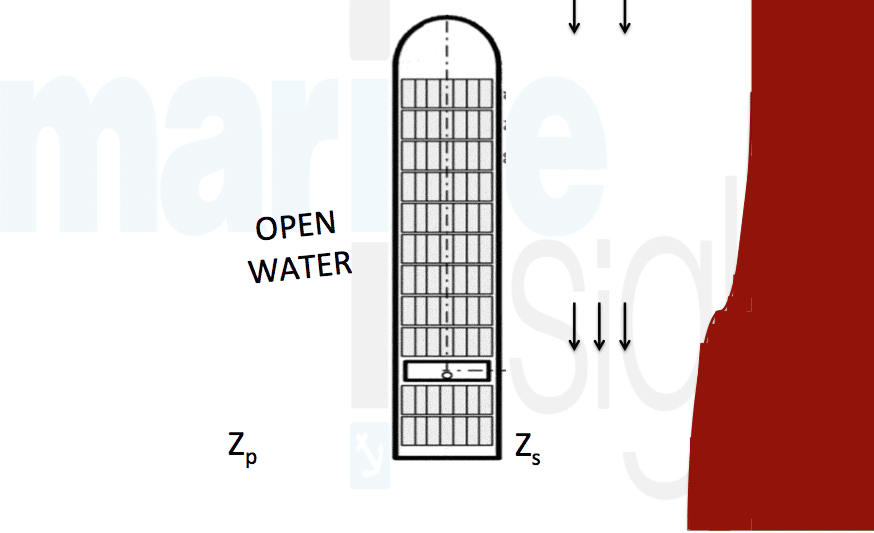 We see the ship is close to the stern on the Starboard side. While the port side is wide open. When the ship plies with considerable speed parallel to the bank, water flow rushing below from the vicinity of the starboard bow towards the stern gets bottled at the constricted space at the stern. But to satisfy the Continuity Equation, its speed increases below the Starboard Quarter. This increase of the speed of the passing water decreases the pressure at the Zs zone than the Zpzone on the Port Quarter.

A pilot while maneuvering near a bank must slow down to minimize this effect and take the help of rudder to counter it as best as he can. Else he may be forced to move out of the channel. Two ships passing close to each other will experience similar effects in close proximity. Slowing down is the only solution, as usual for both the vessels. 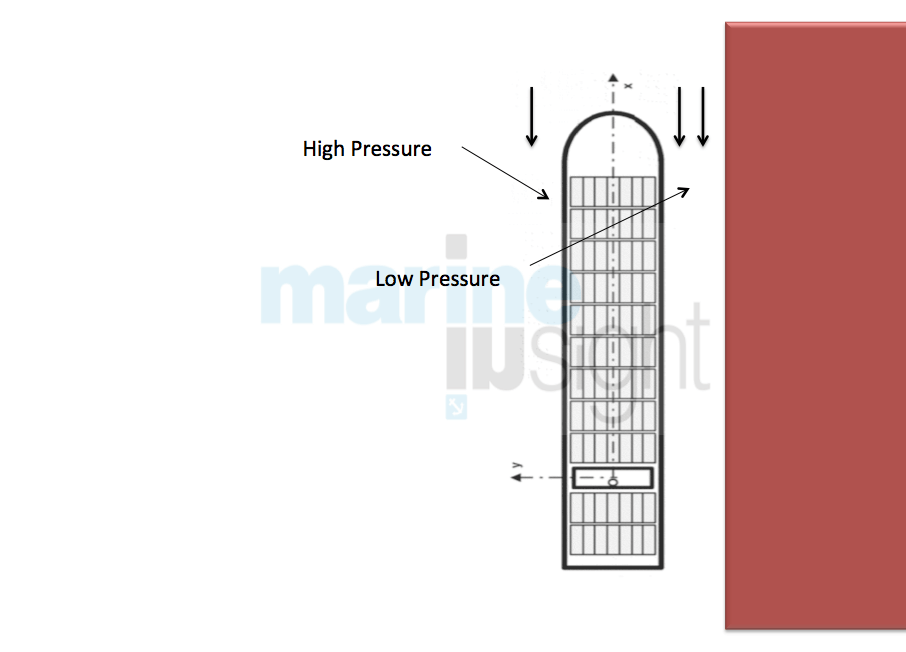 When the ship is approaching a steep bank as in fig 4, the water pressure at the starboard bow being less than the port bow ( due the asymmetric flow, explained earlier), the bow is pushed towards the port as to dampen the speed of the fall. This is called Bow cushioning effect.

To minimize these effects the pilot must slow down to avoid any untoward incident or accident.