How Baltic Mooring of Ship is Done?

What happens when there is a strong onshore wind and you have to berth a ship without the assistance of tugs to a pier or jetty that is not strong enough to bear the impact or is not sufficiently ‘fendered’?

In such a situations, the master or the pilot takes the recourse of using the ship’s anchor as well as the wires available on board in a specific way to minimize the impact of the fall. This is done by mooring ship in such a way where a vessel is berthed alongside the quay by employing a stern mooring shackled to the offshore anchor cable in the region of the ‘ganger length’. When approaching the berth, the offshore anchor is deployed and the weight on the cable and the stern mooring act in unison to hold the vessel just off the quay.

Baltic mooring is a combination mooring of a vessel alongside the berth which employs a stern mooring shackled to the offshore anchor cable in the region of the “ganger length”. When approaching the berth, the offshore anchor is deployed and the weight on the cable and the stern mooring act to hold the vessel just of the quay. Baltic mooring is a safe option to berth a ship on a windy day. 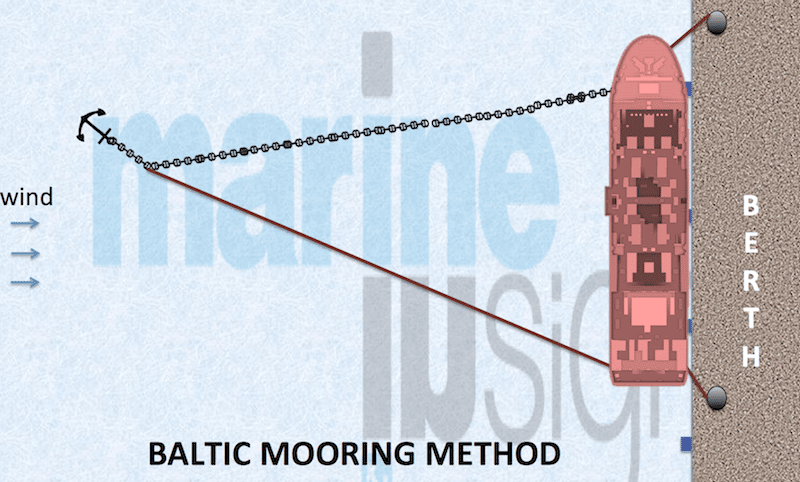 Now, there is a preparatory process to be undertaken before venturing for the Baltic moor.

– At first a 30 mm wire is passed from the poop deck on the offshore side from the outside of the hull and clear of any protrusions like the gangway, the pilot ladder etc.

– The anchor is cockbilled, i.e., released a little from the hawse pipe before finally letting it go, and a man is lowered with a bosun’s chair (a seat suspended from the ship to perform any work outside the ship’s hull) to tie up the wire to the anchor with a shackle at about the ganger’s length.

– The other end of the wire is taken ‘on turn’ upon a mooring winch through a bight.

– When the ship is abreast of the berth and falling on it rapidly, the anchor is dropped keeping trickle headway so that the anchor holds.

– When the anchor is snubbed, the wire from the stern that goes in with the anchor, gets taught and effectively holds the fall of the stern.

– The anchor chain is then slowly payed off and simultaneously the wire from the stern, while the on-shore wind pushes the vessel horizontally to the berth.

– As soon as the vessel is close -springs, head and stern lines are passed ashore with the heaving lines and the scope of the anchor adjusted accordingly so as to bring the ship slowly alongside the berth.

– Normally the anchor is dropped 70-100 feet off the berth depending on the wind force and the tonnage of the vessel.

Watch the video below to understand the process: