Each vessel has been designed with mooring arrangements such that ropes and wires of recommended strength can help it moor safely alongside a berth, floating platform, buoy or a jetty. Fundamentally a vessel has to be positioned alongside a jetty or a berth, between mooring buoys, to a mooring buoy, to another ship or barge and then made fast using her own anchors, mooring lines or shore lines.

While Moored alongside a fixed or floating jetty or a sea berth there are various forces action on the vessel such as wind, current, tide, wave action, swell, surging induced due to passing ships and trim of the vessel. The spring, breast and head lines prevent vessel’s movement against the action of these forces. The directional effect of these need not be unidirectional. It can be multi-directional or at various angles to the vessel. The resultant direction of these forces often changes with change in direction of onshore/offshore winds or tidal streams, currents upriver and down streams. Thus a combination of breast ropes, head ropes and spring ropes is the best method to counter these forces and keep the vessel safely alongside.

Often mixed moorings are observed as some terminal based on local conditions and experiences require vessels to use more lines than they are designed for . Thus the method in which wires in conjunction with soft ropes with different SWL and construction are used as well is termed as Mixed mooring. The simplified resultant of these forces would tend to move a vessel in transverse or longitudinal direction with respect to the jetty. Thus spring lines prevent the longitudinal motion and the breast lines check the transverse motion.

It is always preferred to avoid mixed moorings due to variable loads and elasticity of various kind of ropes and wires which lead to different strain or weight on the lines. This can result in excessive loads on some lines than others and eventually part them putting the vessel in danger. However,  for safety reasons or in a desperate situation shipmasters or pilots may have to resort to mixed moorings.

Ship to Ship transfer operation involves mooring alongside of two different or same sized ships for cargo transfer. During this operation either one of the ships is at anchor or both are underway. The mooring arrangement depends on the size of the ships. A vessel either at anchor or stopped and maintaining a constant heading is approached by the manoeuvring ship at an angle of approach as smaller as practicable. The region of approach is usually abaft the beam of the constant heading ship. During the approach as the manoeuvring ship comes closer, it steers a course parallel to the heading or course of the other ship and reduces the horizontal distance between ships to less than 100 metres. Once this state is achieved the manoeuvring ship uses engine and rudder movements and reduces this distance further until the fenders touch eachother. The two ships thus then make parallel contact and the lines are passed respectively as per the mooring plan. As a common practice during the approach the wind and sea are preferred to be from ahead or at very small angles to the bow. 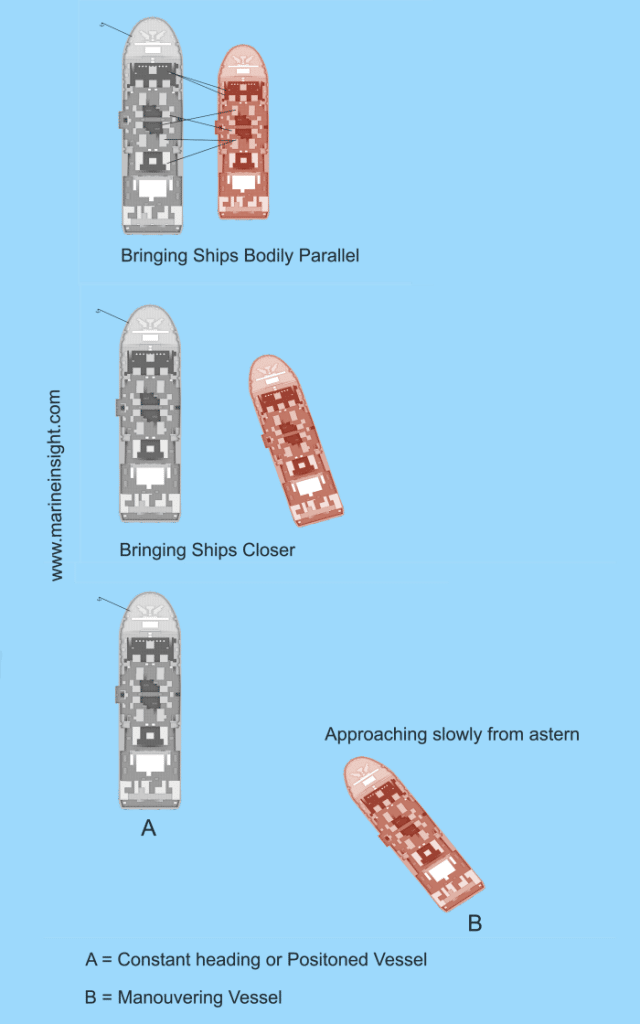 Single buoy or single point mooring : Often larger ships which cannot approach ports and terminal are berthed outside the port limits or in sheltered anchorages and the cargo transfer carried out with the help of Single point or single buoy moorings. The basic principle of the buoy is to keep the position of the vessel with respect to the buoy steady and at the same time allowing vessels to swing to wind and sea.. Often a tug is provided at the aft to keep the ship at a fixed angle and distance from the buoy. The buoy is fixed by positioning it in the centre of four anchors connected to it. The ship is made fast to the buoy with the help of a single chain or two which is secured onboard to the bow stopper. In general while approaching Single point or single buoy moorings weather is a major criteria in determining whether to berth the vessel or not. Calm seas with low swell and wind force below 15kts are considered favorable to make an approach. Presence of strong tidal current limits the interval for berthing and unberthing. The headway approach has to be slow often less than while at the same time approaching at a smaller angle to the buoy and then gradually hauling in the buoy messenger rope and pulling the vessel slowly towards the buoy using engine kicks at short intervals to control and maintain headway along with mooring winches to haul in the vessel when she nears about 150-200 meters from the buoy. For unberthing the chain is released from the bow stopper and a short kick on the engines going astern swings the bow to starboard for right handed propellers thus clearing the vessel of the buoy. Tug’s assistance can also be sued to pull the vessel astern and clear it of the buoy. Know more about single point mooring here. 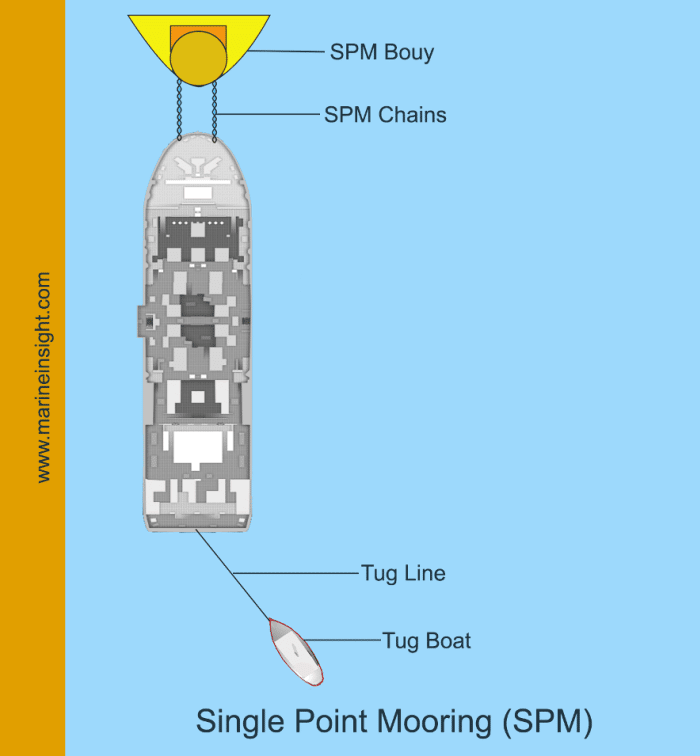 Conventional buoy or multi buoy mooring : In this method the bow of the ship is secured using both her anchors whereas the stern is secured to buoy around it . In the approach firstly vessel approaches the final berthing position from forward at an angle of 90 degrees to her final direction of berthing. The starboard anchor is then let go first at a pre decided spot while the ship is making headway. Required amount of cable is paid and the astern propulsion too operated simultaneously to stop the vessel. Once the vessel is stopped in water port anchor is let go and thus vessel positions her stern along the centerline bifurcating the buoys . For aligning the vessel along this centerline port cable is paid out and starboard cable heaved in with astern propulsion . The helm and engines to be carefully used during this maneuver to ensure the stern is swinging clear of any of the buoys. During unberthing the anchor cables are heaved in to move the vessel forward and the weight is taken on windward lines while casting off other lines to prevent swinging of the stern into the other buoys. This manoeuvre requires skill and efficient operation of ship’s crew as well as of the mooring equipments as often weight of the lines can be immense.

Mediterranean mooring : For this type of mooring, a pre-calculated position is determined and approached using engine movements. The bow initially is made to cant towards the berth and the starboard anchor is let go in that positions. After this the engines are run astern and the port anchor is let go at the designated spot. The vessel falls astern and swings to starboard. Thus vessel is held by both the anchors as it approaches the quay. Stern lines are then passed. Moorings are kept tight by using the anchor cables. The positioning of vessel is such that mooring is completed with around four shackles on each anchor. Often tide is used to control drift of the vessel towards quay while positioning it by heaving or paying out on one of the anchors. Read more on mediterranean mooring here. 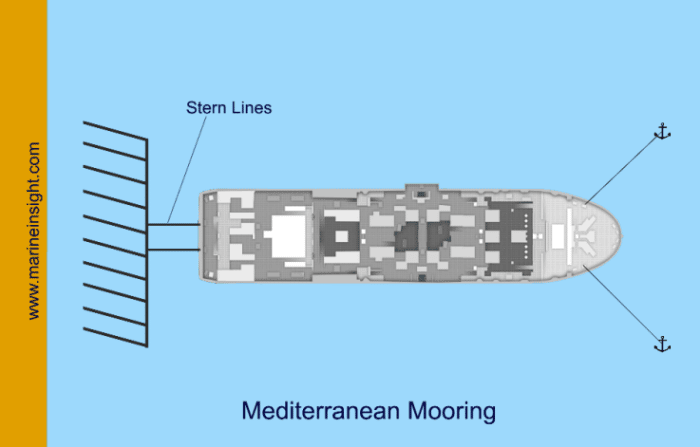 Running Mooring : This manoeuvre takes relatively short duration compared to Mediterranean mooring and offers more control of the vessel. The vessel’s starboard anchor is let go at a position approximately four to five shackles from the final position of the bow and around 9 shackles paid out while moving ahead on engines. Then as she falls astern with the tide the port anchor is let go and the starboard anchor is heaved on to five shackles. This method restricts the swinging room and reduces the load on windlass.

Standing Mooring : This is practiced during cross winds. As the vessel is stopped the port anchor is let go and with the tide around 9 shackles are paid out. The starboard anchor is let go and simultaneously port anchor heaved on. Thus the port anchor is kept on 4 shackles being generally the flood anchor and starboard on five as it is the ebb anchor. This vessel takes longer duration and provides less control over the vessel . The load on windlass is more as compared to running moor.