As seafarers we are very uniquely placed.

We live and work in our workplace as it moves around the world incessantly. Our cabins become our physical possessions for the specific duration of our stay. As senior officers sometimes we do the same ship several times and stay in the same cabins intermittently for a few years too. Boarding and lodging is on the shipowner and so are the medical expenses. We are also told that we’re insured for a certain amount of money.

All this fills us up with a false sense of security and complacency because of a lot of reasons, which actually manifests itself in the forms that are mentioned and explained below.

Because we do not learn to spend on the home-front until we are married, we do not appreciate how much it costs to run a household. We do not develop any perspective of small day to day expenses and learn to plan for the same. This lack of practical experience and understanding of personal finances often leads to some major mistakes, which could have been easily avoided.

Needless to say, as seafarers we make a lot of financial blunders, which eventually boil down to following common ones:

Times are changing and so are shipowners and requirements of seafarers. Just because our salaries have not increased in real terms does not mean that the cost of living on shore has not increased. In fact, the cost of living, medical expenses and also the life aspirations on shore have gone up substantially. Unless we plan our finances wisely and realistically we could be in for a serious shock in our later lives.

Seafarers often do not plan for their own medical insurance. They feel that the shipowner will cover them for any eventuality. This is not true because during the leave period, MOST of the companies do not cover them. Hence if something happens to seafarers or their families during leave, the medical and other related expenses can be huge. It is therefore advisable to go for a Floater type of policy for your ENTIRE family.

A sailor (Officer or non-Officer) thinks that the shipowner is providing them with adequate life cover. Little do seafarers realise that the Insurance cover is only for the tenure of their working period on board. They do not plan for cheaper forms of insurance (called TERM INSURANCE PLANS) while they are young and the premium is less. If they did plan at an age of 22 and took the insurance till the age of 75 they will have to pay way less (about $150 to $200 a year). The coverage for such plans would be in the range of $300,000 and the premium would stay fixed till the age of 75 (or as applicable in your respective country). Remember, TERM PLANS are risk only plans, meaning that your survivors will be paid in case something happens to you, otherwise the premium will be consumed. It is almost like the ship insurance plans.

What is more worse is that even if seafarers take Life Insurance Policies, they are mostly money back or endowment policies, which do not have a very large coverage amount but in the garb of giving back the money they charge astronomical premiums. Please do not fall for such Life Insurances. A good insurance for you for Half a Million dollars should not cost you more than $300 if you are below 30 years of age and a non-smoker (Medical and health requirements will vary depending on the country and company). 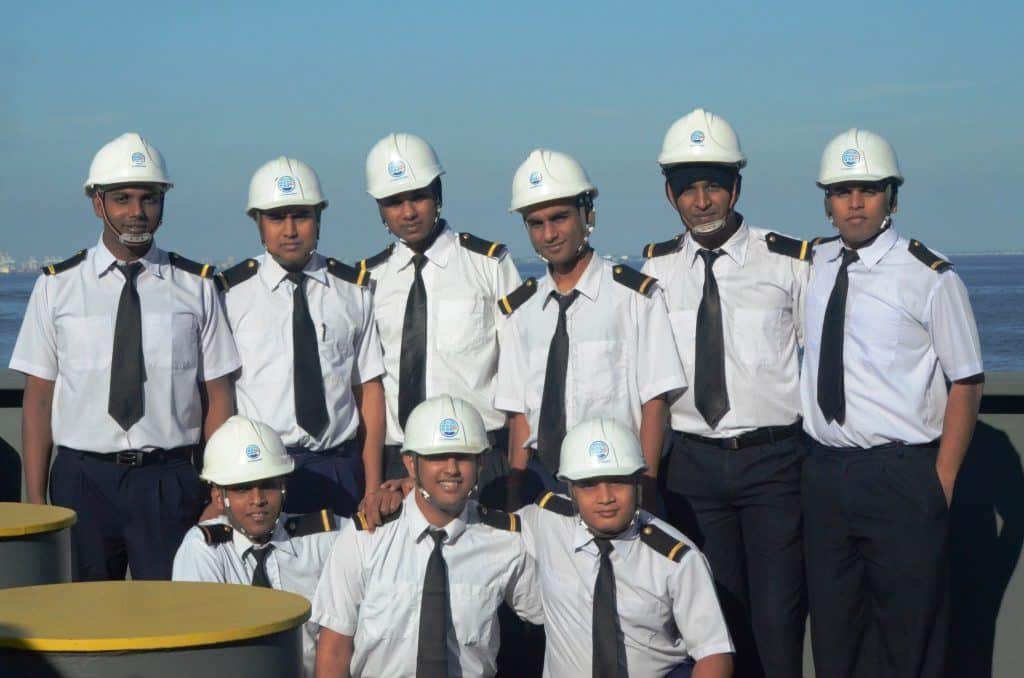 Today an officer leaves home for a period of 3 to 5 months and a Non-Officer for even more. Though the salary is regularly sent home via ALLOTMENTS, sometimes this does not reach or is not sufficient. There are also situations when a family member is seriously sick and if there is no Health or Medical Insurance the cash outgo can be huge. For such occasions seafarers must deposit money in a separate account for at least 3 months of HOME EXPENSES so that it serves as an emergency fund.

6. No Proper Plan For Savings:

Though the modern seafarer is getting wiser than their predecessors, most of the times they either do not save or save SUFFICIENT savings. If the seafarer doesn’t start saving in the initial years when he is not married or have any major responsibility, it can get a bit serious as he will lose the advantage of being an early bird.

Let’s take an example to understand this.

In the table shown below Seaman Michael (just for e.g) starts putting away only $100 a month in a scheme giving a return of 12% per year (p.a.) and continues till the age of 31 and STOPS depositing thereafter. However, he does not withdraw and lets his savings continue till the age of 50 , WITHOUT adding anything more.

After few years, he is keeping watch with Second Officer Ruel, who is also same age as Michael. Ruel finds out about Michael’s plan and starts himself in the same plan and keeps saving $100 every month TILL the age of 50.

Now from the table below it will be very clear to you that despite stopping after 10 years Michael has $ 15,114.31 in his account. Whereas Ruel has only $13333.39 even though he continued with his contribution of $100 till the age of 50. Ruel will never be able to make up for the shortfall created because of his delay of just 5 years .

The third column in Yellow shows what the value of savings/investments would have been if Michael had continued putting his $100 throughout his working period. 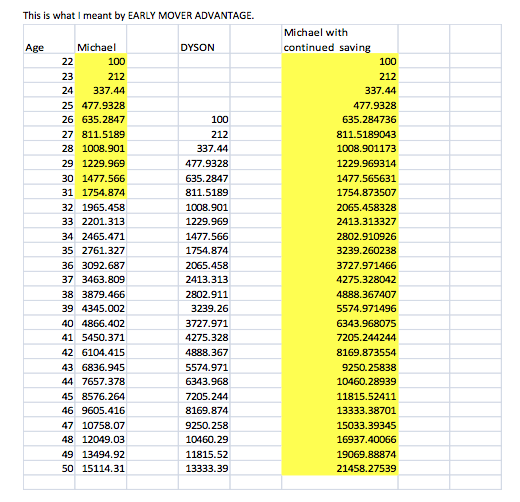 A house is a must for every human being and is the third necessity after food and clothing. I firmly believe that one should acquire a shelter as early in life as possible.

However, one should take consideration of the city that one intends to settle down and also the area. A big and popular Metro maybe a good attraction, but if you intend to make a career at sea, is it worthwhile staying in a bigger city with limited and expensive resources? Shifting to a smaller city or what maybe a suburb might be cheaper today and which eventually may easily develop in 5 to 10 years time.

Another aspect in housing is the loan (also called mortgage in some countries). There are various aspects to it. If you take a very high value loan with a high rate of interest early in life, it may impede or hamper your professional and financial progress and even put a high burden on you during a stage in your life when you need cash for a lot of things.

This is an aspect that I will cover in my future articles, as it forms the basis of mental peace for seafarers.

Because of our limited exposure to methods on shore, we start trusting various agents and employees of the bank. Most of the useless plans and insurances are sold to us without our requirement for the same by the beautiful girls at the glittering banks, which they have now become. I have myself been a victim of such mis-selling. All these plans burn a very large hole in your pocket in the long run; it’s very simple- you are buying bananas, when actually you need apples.

Most of this wrong guidance comes from known people and relatives, who either sell it to the seafarers themselves, or connect them to the wrong people. Stay away from it. Educate yourself and make a wise decision.

9. Spending Too Much On Things You Use Little:

In our initial years at sea, we have longer contracts. As a result all the latest gadgets that you buy are not utilised. Most of them are bought with the input of the colleagues or friends on shore or because of the advertisements that you see at the airports while joining or signing off from your ship. Just imagine during a 6 months contract you buy a $800 iPhone, when you actually cannot call with it while at sea. Instead a $300 tab or a Laptop can help you make free calls, send messages via “online messengers” or emails. By the time you sign off from the vessel- the $800 gadget has already become obsolete with a new version already out in the market. The vicious cycle of purchasing irrelevant things thus continues.

Expensive motorbikes or cars are other objects of desire that seafarers purchase and leave home while staying for long periods of time at the sea ( Yet another impulsive buying habit which is a product of “materialistic comparison” with others – mainly family and friends).

I remember a fourth engineer who during his first tenure on board was bent upon buying a BMW car for his father, who drove a modest Maruti 800 and who was strongly against such a waste of money. The fourth engineer would have bought this by taking a loan at a very high rate of interest. Everyone on board had to make an extra effort in explaining to him the futility of his action, especially because he also had a education loan of $20,000.

If the senior officers or those who have spent quite some time at sea do not provide good advice to juniors, the latter land up picking up things of high value and least utility while on board.

10. Not Keeping in Touch With Developments in Respective Countries:

News from home should not only consists of Formula One car racing or cricket match scores. Good news or news of an opportunity can save and make money if you can utilise it at the right time. A lot of you may believe what does this points have to do with financial planning? Actually it has a lot to do.

Our income from our sailing job is fixed and does not go up with the cost of living in our own country. Hence we have to devise ways and means to make stretch this income. The idea is to use it to generate more returns in an efficient, legal and tax efficient way.

If this is done properly, I can assure you in about 10-15 years of your working life, you will have two sources of income and in all probabilities, the returns from your investments may outstrip your salary.

In the forthcoming articles we will deal with each aspect of this financial planning.

Eventually, we will surely and steadily move in a direction that will ensure Financial Freedom for seafarers.